Back
A Journey to Levka Ori ( White Mountains )
A Journey to Levka Ori.
The idea blossomed in idyllic surroundings watching the sea wash onto the historic shoreline near Agii Theodori enjoying our third bottle of excellent Cretan white wine. In such  scenarios ideas bloom into fruition I asked our good friend Sharon Smith of Crete Holiday Buddy the best way to visit the White Mountains, she replied knowing I dislike excursions “try a Jeep Safari”. It’s a long day but will give you an idea of the way to plan for your future trips “In Search of Philedem”.      On her recommendation we made an early start, early for me that is, in Mid-September, 2015 we had an expert driver and clued up navigator of all things Cretan, and more importantly he knew all the goat tracks, shepherds huts (Mitato) flora and fauna on the White Mountains, Mihalis was a diamond. My interest focused on or around the Andartes (Cretan resistance fighters) of World War Two. I must admit I wasn’t quite ready for the stunning beauty of the wild mountainous area they operated in between 1941-1945. It comes as no surprise the German army of occupation didn’t venture into the more remote parts of the region without substantial reinforcements.
The villages have legendary names Meskla, Therisso, Lakkoi and Nea Roumata it was like opening a newspaper in 1941 all names associated with brave resistance against the Nazi occupation. It seemed to me I was caught in a time warp, very little had changed, the twenty first century had passed them by, I was in my element.
We stopped for a drink at a kafenion in Lakkoi next to the statue of the 3 men climbing to touch the sky. The walls had old Andartes guns from the nineteenth century and a photograph of distinguished looking bearded men all sporting moustaches real characters. I wish I had asked who they were and when it was taken, yes we will return in May 2017 questions need to be asked.
Next we visited Nea Roumata for lunch before going off road to Palea Roumata on the way through the wildest area we passed a lone dog on a long chain barking away at us interlopers. I asked why he was here so far from civilization and was told it was the only economical way to stop one shepherd’s sheep/goat herds from straying into another shepherds flock. He had shelter and some food but it must have been a lonely existence.
It was the time of harvest abundant fruits, trees full of lemons, chestnuts, olives, apples, the smell of herbs on the air, thyme and rosemary such abundance. We had already driven through row after row of grapevines it struck me as an ideal  landscape for viticulture a Cretan staple in the harsh months to come. There would be hard work ahead for the local landowners to maximise their crop before the savage winter arrives and the roads become impassable. We finished the day at Ano Vouves viewing the ancient olive tree and planning for our return. 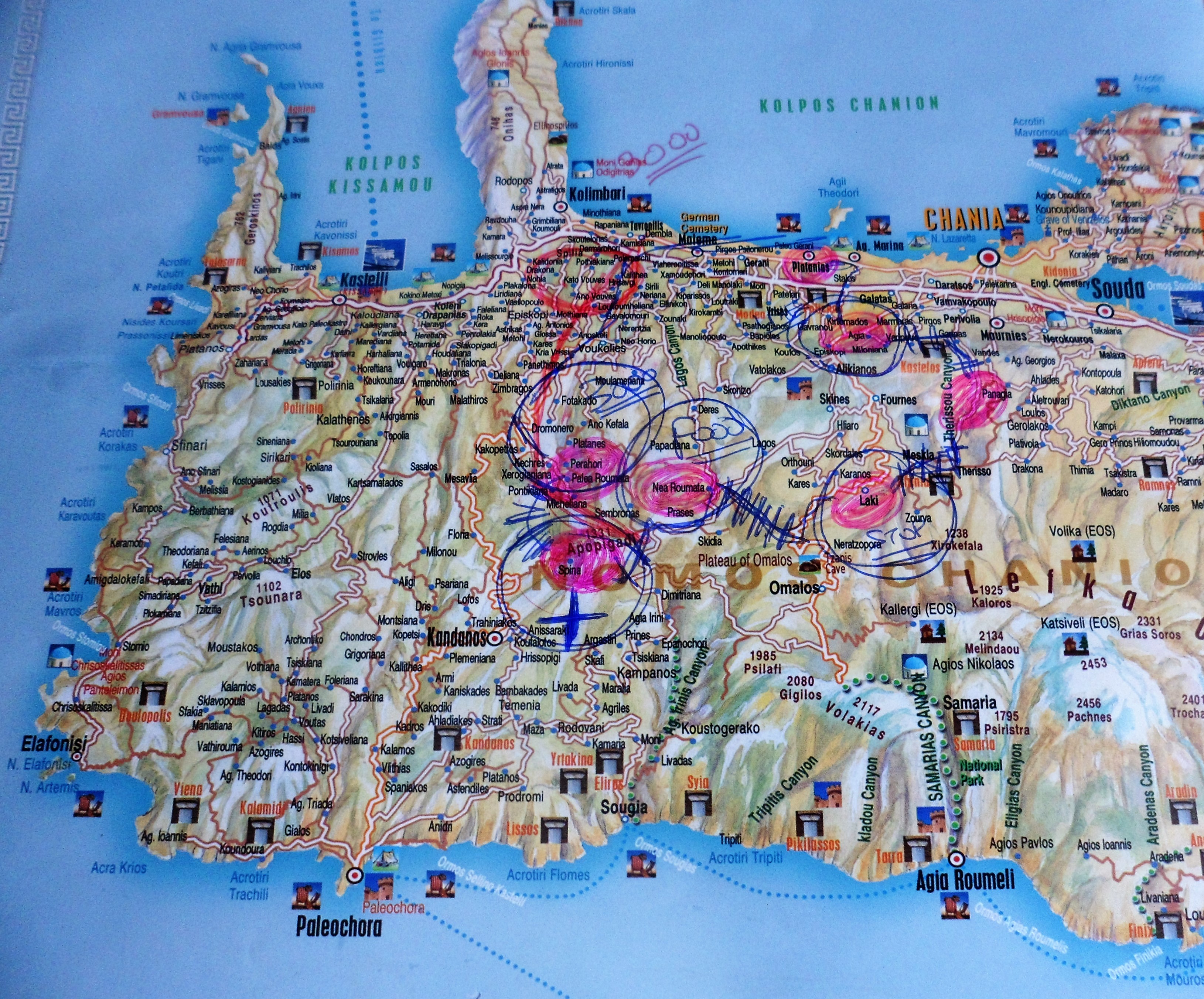